On the night of the 1st December, 1923, Kathleen Price and Charles Johnson arrived home about 11pm to the boarding house where they lived at 230 Lygon Street. The boarding house was run by Mrs Clara Aumont, and Charles, Kathleen and Doris, Kathleen’s 9 year old daughter, had been residing there for about a month as a family unit in 2 rooms upstairs. Johnson was drunk and had been witnessed by Mrs Aumont sniffing a substance, thought to be cocaine, earlier in the parlour room. Doris had been in her mother’s bed reading her school books when the couple arrived home. Kathleen ushered her into her own room with a kiss goodnight, where she fell asleep. Johnson was drunk and in a foul mood because Kathleen had refused to give him money earlier in the day.

At around 1.45am on Sunday morning, Doris was awakened by her mother’s screams. She went into her mother’s bedroom to find Johnson had Kathleen by the hair and a table knife to her throat, threatening to cut her. Doris was hit across the face by Johnson as she tried to intervene. Johnson threw away the first knife as it wasn’t sharp enough, and retrieved another from the drawer. Kathleen had rolled under the bed to get away from Johnson but was pulled out by her legs. Johnson threw Kathleen against the side of the bed, kicked her in the head, before cutting her throat with the sharp table knife and throwing her face down on the floor. Doris ran down and wakened Mrs Aumont who told her to go for the police. When Johnson came downstairs, Mrs Aumont asked him what he had done, to which he replied “She is as dead as Julius Ceaser, I will go to the gallows for her as I love that woman”. 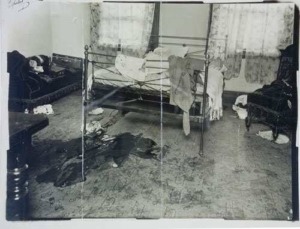 When Senior-Constables Murray and Crawford arrived at 2.25am, Johnson met them at the front door. The police noticed his bloodstained hands and suit, and that he was drunk. He was asked what had happened, to which he replied, “come upstairs and see”. Johnson showed them where Kathleen’s lifeless body lay in a pool of blood on the floor of the front bedroom. When asked had he done it, Johnson replied “there she is, she is dead alright”. Senior-Constable Murray later described the room as “bespattered with blood and a desperate struggle having taken place”. The heel of Kathleen’s shoe was torn off and her false teeth were found 3 feet from the body.  Johnson was arrested and placed in the City Watch House while Kathleen’s body was removed to the morgue.

The post mortem reported that Kathleen Price was aged 30 years, “a well built and well nourished woman of 5 feet, 4 inches tall”. Blood was splattered from her neck to her feet. She had numerous cuts and bruises and her right thumb had been almost severed at the first joint. There were cuts on her chin, her elbow and right breast. Her lips were swollen and bruised, along with both eyes and her left cheek. A wound in Kathleen’s throat which measured 5 ½ inches in length and was gaping 2 ½ inches was her cause of death. The cut had severed many of the vessels and muscle in the neck and had opened her windpipe. Hair was found clutched in Kathleen’s hand.

Johnson was sent to trial at the Melbourne Supreme Court on the 15th February 1924, after the coroner found him responsible for Kathleen’s death on the 7th December 1923. Much of the defence rested on whether Johnson was of sound mind or not due to both cocaine use and alcohol consumption. The jury deliberated well into the night before reaching a guilty verdict at 10pm, with a recommendation for mercy. Johnson was sentenced to death but this was later commuted to life imprisonment without benefit of regulation or remission. 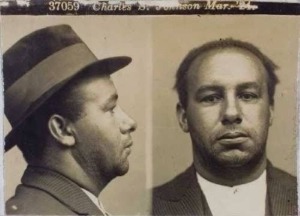 Initially incarcerated in Melbourne Gaol, he was later transferred to Geelong Gaol in January 1935 for treatment of hemiplegia and aterio sclerosis. It was attempted to have him released to his sister’s care in Coburg in early 1939 as Johnson had become bedridden and was not expected to live much longer. He died in Geelong Gaol in 1939.