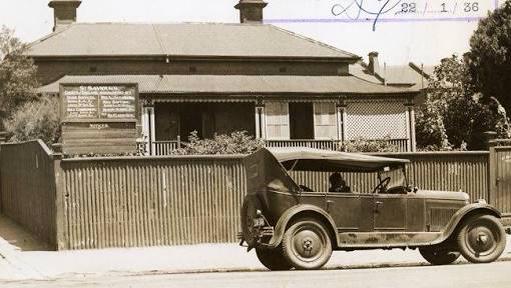 With his head battered shockingly by a blunt instrument, Rev. H. L. Cecil, of St. Saviour’s Church of England, at Fitzroy, was found dead in his vicarage shortly after 8pm on this night 1935. He is believed to have been the victim of thieves whom he had disturbed. The discovery was made by a number of his parishioners. Police who are investigating the matter are handicapped seriously, as the crime apparently was committee at about breakfast-time. Rev. Cecil was a bachelor and lived alone at the vicarage. Parish loners who arrived there on this night for the monthly meeting were alarmed to find the house in darkness. When they knocked at the front door there was no response, so they walked round the side of the vicarage, and opened a door which had been left unlocked. The house was in complete darkness, and switching on the light they were surprised to find the kitchen table set for breakfast with the kettle still on the stove. As they walked towards the front door they saw a jug of water standing in the passage. The water was blood-stained, and must have been used by the murderer to wash his hands before he fled from the house. The study was in disorder and showed signs of a terrific struggle having taken place. Rev. Cecil’s body was lying behind the front door. His right hand was stretched out as though he had tried to reach the door before he collapsed. His skull was badly fractured in several places but there were no signs of the instrument which the murderer had used. The murderer evidently had entered the house when the minister was about to begin breakfast. It is surmised that Rev. Cecil surprised him and that a struggle for life followed.