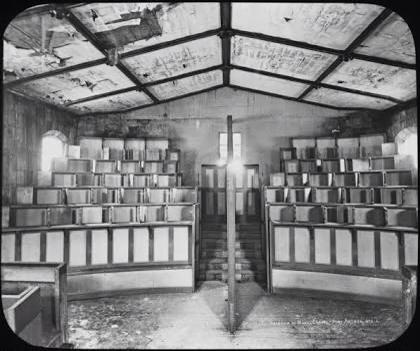 One of the most interesting places in the gaol is the chapel, where those of the inmates belonging to the Protestant denomination attend on Sundays. It is fitted up in a singular manner, so that not one of the prisoners can see the one next to him. This is skilfully arranged by means of doors every seat is divided into so many compartments, with a door to each. The first that enters the seat goes to the inner end and the others follow in their order, each shutting his door after him, and when the seats are full the warder runs a bolt through the whole of them. These doors and the backs and fronts to the seat are higher than a tall man, so that the occupant cannot see any thing but what is above him. Consequently a gallery is fixed at one end of the room high enough up that the prisoners can see it. In this stands the clergyman and an armed warder who can see the movements of every one in the chapel. The seats and in fact all the fittings have been lately beautifully grained by one of the prisoners now undergoing a sentence of two years imprisonment.

The Hospital of the Geelong Gaol