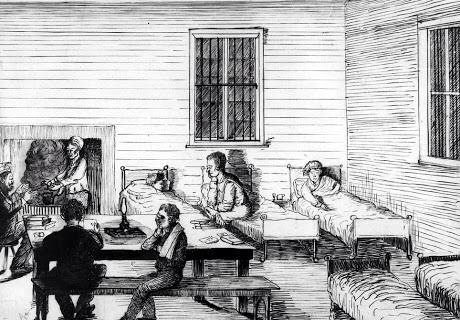 The infirmary was a large room containing seven or eight beds, but it is very seldom occupied as the prisoners are too well cared for to get sick. There is, however, one occupant in the form of a poor paralytic old man, who was discharged from the hospital or benevolent asylum, and for the purpose of being sent to gaol was charged with lunacy. Next to the infirmary is a ward room, in which are generally placed lunatics who have become convalescent enough to be trusted with others without fear of danger. Near to these are the surgery, the bathroom, where hot and cold baths are provided for patients, and a few other compartments, for which there is no particular.

The Kitchen of the Geelong Gaol

The Chapel of the Geelong Gaol
Scroll to top Book online now!