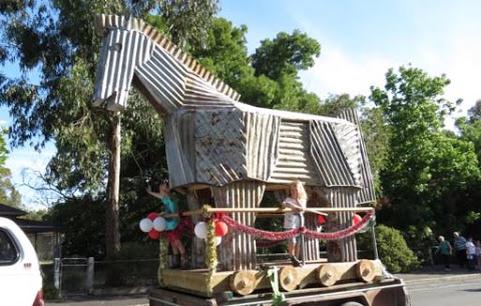 A Trojan horse was used to regain possession of a transport and earth moving site run by the Bryant group in St Mary’s, Sydney, which had been repossessed by the Commonwealth Bank over a mortgage dispute that was still before the courts. On the morning of the 6th of January 1992, managing director Joe Bryant arrived at the site with a semi trailer carrying a 4m long cylindrical horse used by farmers during a demonstration against President George Bush in Canberra the week before. Security guards let Bryant in, thinking he was returning the horse to the site. Once inside that gates, the 30 workers hiding inside the horse spilled out, and the outnumbered security guards withdrew, allowing the workers to open the gates and let more supports inside.

Horse in a Tree