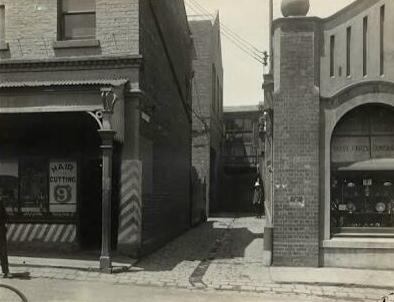 Alma Tirtschke, aged 12, was raped and murdered on this day in 1921. Tirtschke was last seen alive close to a drinking establishment, the Australian Wine Saloon near Gun Alley in Melbourne. Earlier that day she lifted from her grandmother’s house in Jolimont, on her way to her Uncles butchers shop in Swanston Street, to collect a parcel of meat, drop it at an aunt’s Collins Street home and return to Jolimont. It was uncharacteristic for Alma to take so long on her errands. A witness said he saw a man following Alma. Reliable witnesses who had nothing to lose or gain by telling police what they knew said Alma was dawdling, apprehensive and obviously afraid. Just a few metres away from the Australian Wine Saloon in the Eastern Arcade, between Bourke and Little Collins Streets, where Alfred Place runs off Little Collins Street, Alma was last seen about 3 pm on 30 December 1921. Her naked body was found early the next morning in a lane running east off Gun Alley, not far from Alfred Place. Following the discovery of the body, the owner of the Australian Wine Saloon, Colin Campbell Ross, was charged with her rape and murder. The case against him was based on the evidence of two witnesses, plus some strands of red hair, apparently from Tirtschke’s head, which provided a vital connection between Ross and the murder. Ross protested his innocence but was hanged. The two witnesses were later considered by many to be unreliable, both having had a motive to lie. The only credible piece of evidence was the red hair that connected Ross to the case. Ross could account for his movements at the time Alma disappeared, and later that night, when her body was dumped in Gun Alley. With nothing to hide, Ross had told detectives who interviewed him that a little girl matching Alma’s description had passed his saloon, but that this was his only connection with the victim. More reliable forensic examinations in the 1990s disproved the red hair connection and showed that Ross was probably innocent. Colin Campbell Ross was granted a pardon on 22 May 2008, the date on which the Victorian governor, as the Queen’s representative, signed it. The pardon was announced publicly on 27 May 2008. It is the first – and to date only – pardon for a judicially executed person in Australia. In the book which led to Ross’s pardon, author Kevin Morgan revealed for the first time the evidence missed by the police in their original investigation and identified by name Tirtschke’s probable killer.