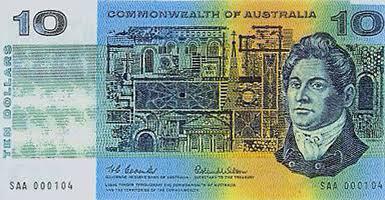 Convict Francis Greenway was born near the English city of Bristol, where he became an architect. In 1809 he became bankrupt and in 1812 he pleaded guilty “under the advice of his friends”, to forging a financial document and was sentenced to death; this sentence was later commuted to 14 years transportation. Why he pleaded guilty is unknown; he may have been told it was the only way to save his life. Whilst awaiting deportation to Sydney, Greenway spent time in Newgate Prison where he completed paintings depicting trials and scenes within the prison. Greenway arrived in Sydney, New South Wales on the transport General Hewitt in February 1814 to serve his sentence. On board the ship was the surgeon Dr. John Harris who was to give Greenway his first private commission in the colony which involved extending his residence on his Ultimo estate. Between 1816 and 1818, while still a convict, Greenway was responsible for the design and construction of the Macquarie Lighthouse on the South Head at the entrance to Port Jackson. After the success of this project he was emancipated by the governor Lachlan Macquarie, and in the role of Acting Civil Architect and Assistant Engineer, went on to build many significant buildings in New South Wales. Greenway’s works include Hyde Park Barracks, the Government House and what is considered to be his masterpiece; St James’ Church, Sydney. There are still 49 buildings in central Sydney attributed to Greenway’s designs. Greenway died of typhoid near Newcastle in 1837, aged 59. The exact date of his death is not known. He was buried in the Glebe Cemetery at East Maitland on the 25th of September 1837, but his grave is unmarked.

Francis Greenway was on the old $10 note.