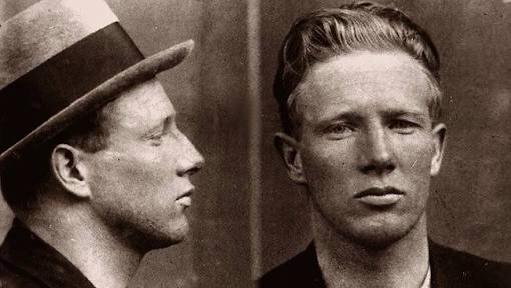 John Daniel Cutmore had had 18 convictions recorded against him since 1914. Known as “Snowy” Cutmore, he had also appeared under various aliases, including that of John McLaughlin, John Nolan, John Watson, and John Harris. His longest sentence was 12 months in Sydney in 1923 for thieving. His offences included assaulting the police, shooting with intent to do grevious bodily harm, and thieving. While in gaol in Victoria he gave little trouble to the authorities, but was a source of considerable worry to the detectives, who, while suspicious, were very often unable to obtain convictions. He was said to have usually carried a revolver, and was suspected of more than one “hold-up.” In police circles he was regarded as a dangerous criminal, whose cleverness enabled him to escape the consequences of many crimes. In 1915 Cutmore was suspected of having been associated with the murder of a sailor in Melbourne. He was presented for trial, and was found not guilty. He joined the Australian Imperial Forces, but did not leave Victoria. He gave a great deal of trouble to the military authorities, and served sentences on various occasions in Geelong and other gaols, and also in Langwarrin. In 1927, Cutmore was killed in a gun battle with Squizzy Taylor in Carlton.