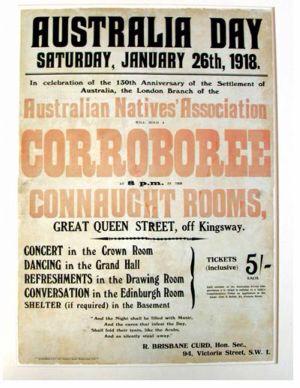 After federation, there was a large discussion about a National Day – Anniversary Day faring as a national symbol? The introduction of the Britain-centred Empire Day and its impact in schools intensified Australian Natives’ Association discussion about finding an appropriate national day for Australia. The NSW branch, feeling that the 26th of January was the ‘day which gave us a bad start’, proposed replacing Anniversary Day with Foundation Day on the 29th April, the day Captain Cook first landed on the east coast at Botany Bay in 1770. But the Australian Natives’ Association’s interstate conference preferred to retain 26 January.

Australian Natives’ Association were active in London during the war but 26 January was no longer Foundation Day but Australia Day by 1918.