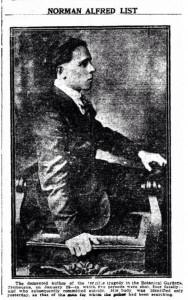 On this day the body of Norman Alfred List was found on the bank of a creek in Pakenham had caused the deaths of the four victims of the shooting tragedy at the Melbourne Botanic Gardens on the evening of January 23rd. His victims were: – Frederick McIlwaine, Miriam Podbury, Eugenie Strohheicker, and John Moxham. After the inquest held at the city morgue, the coroners opinion was that death was due to hemorrhage resulting from a wound in the left arm that he had inflicted with razor. There was nothing to suggest that the man was insane at the time of his death. It was also his opinion that the man had been dead for 4-5 days.