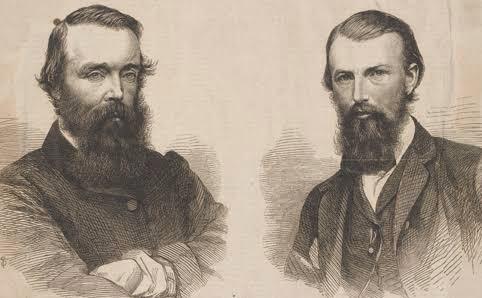 Robert O’Hara Burke and William Wills led the expedition that was intended to bring fame and prestige to Victoria: being the first to cross Australia from south to north and back again. They left from Melbourne in August 1860, farewelled by around 15,000 people. The exploration party was very well equipped, and the cost of the expedition almost 5,000 pounds. Because of the size of the exploration party, it was split at Menindee so that Burke could push ahead to the Gulf of Carpentaria with a smaller party. The smaller group went on ahead to establish the depot which would serve to offer the necessary provisions for when the men returned from the Gulf. In November 1860, Burke and Wills first reached Cooper Creek. From here, they made several shorter trips to the north, but were forced back each time by waterless country and extreme temperatures. It was not until December 16 that Burke decided to push on ahead to the Gulf, regardless of the risks. On 11 February 1861, a small party consisting of Burke, Wills, King and Gray finally reached the northern coast. Crossing extensive marshes, they came to a salt tidal channel surrounded by mangroves, which prevented them from either seeing or reaching the sea. The group immediately turned around and began the long and arduous trip back to Cooper Creek – a trip which Gray never completed. Burke and Wills themselves perished in mid 1861, and only King survived to tell the tale of their journey.