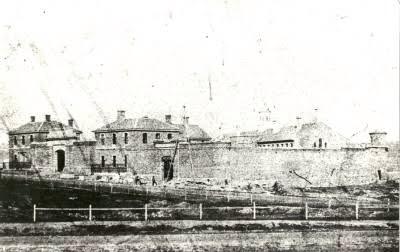 The strict arm of the law was carried into effect on this day in 1864, on Alexander Davis, who was found “Guilty” in the Circuit Court of the murder of George Sims, at Smythesdale, on the 31st May, 1863. The hour of execution was fixed for 9am, and by about 8am a number of persons had began to assemble in the vicinity of the Ballarat gaol. The sheriff had adopted the precaution of allowing no one to enter, except on the production of a written order, but some extra amount of latitude must have been exercised, for a few minutes before 9am, the inner yard was occupied by about fifty persons of all classes, from professional men downwards. At 9am the inside doors were opened, and the spectators were admitted into the main corridor, where the ghastly instrument is permanently fixed. The unhappy culprit was in the upper condemned cell, attended by the Rev. Mr. Potter and the Rev. Mr. Hollis and their voices, administering the last religious services, could distinctly be heard. In a few minutes the sheriff entered the cell, and produced the Governor’s warrant. The executioner then commenced the operation of pinioning, and the unfortunate man was led to the scaffold, his face being turned away from the spectators. In the midst of prayer, to which he listened attentively, the bolt was drawn, a heavy thud was heard, and the sentence of the law had been fulfilled. A few convulsive motions could be observed, the executioner was once obliged to pull the legs of the deceased, and all was over. From the statements made by those who attended the unfortunate man in his last moments, he died perfectly calm and reconciled to his fate. He admitted his guilt and the justice of his sentence. His last words were, “I am truly happy.”