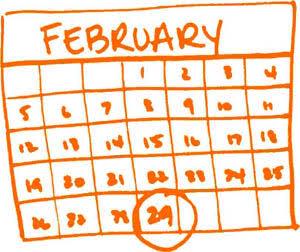 February is the shortest month in the Gregorian calendar, and the only month with 28 days. February has 29 days in leap years, when the year number is divisible by four, except for years that are divisible by 100 and not by 400. January and February were the last two months to be added to the Roman calendar, since the Romans originally considered winter being the northern hemisphere) a monthless period. The change was made by Numa Pompilius some time after 700 BC in order to bring the calendar in line with a standard lunar year. Numa’s Februarius contained 29 days (30 in a leap year). Augustus is alleged to have removed one day from February and added it to August, (renamed from Sextilis to honour himself), so that Julius Caesar’s July would not contain more days. However there is little historical evidence to support this claim.