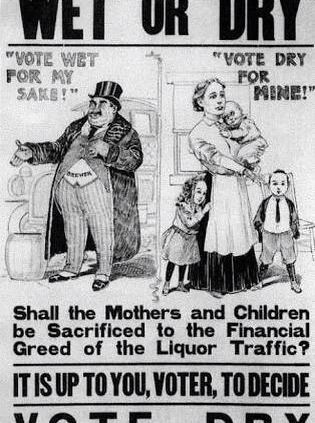 On this day in 1930, the people of North East Victoria, voted on a referendum to bring in Prohibition. The campaign up to the Poll was fought over a two month period, with a coalition of churches and temperance groups under the banner of The Victorian Prohibition League campaigning for prohibition. Opposing the campaign was an unlikely hotch potch of brewing and industry pressure groups, civil libertarians, freethinkers, and moderate drinkers, even some non drinkers, who saw in the American gangster experience something not to be repeated in Australia. The Temperance group conducted a strong campaign on the theme of how much happier home life could be without booze, while the opposition plugged away at the alternative – bootlegging, Chicago style gang wars, and the sobering suggestion that every country which had tried prohibition had been forced to scrap it. The votes were cast, and counted. Prohibition was defeated.