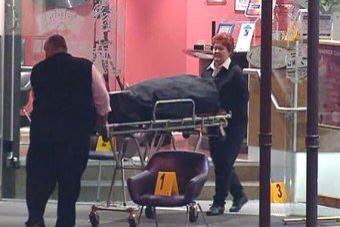 Masked gunmen entered the Brunswick Club on Sydney Road, Brunswick, at approximately 6.40pm on 31 March 2004, driving a Ford Falcon EF XR6 station wagon. Moran ran from his place at the bar, over a poker machine, through a glass window before the gunman caught up with him and shot him twice, the fatal bullet being fired into the back of his head from a few centimetres away. Associate Herbert “Bertie” Wrout was severely wounded but survived the attack. Keith Faure, his brother Noel Faure and associate Evangelos Goussis were charged with the murder. On 3 May 2006, Faure pleaded guilty and was sentenced to life imprisonment with a non-parole period of 19 years for the murders of Moran and Lewis Caine, who was killed two months after Moran. Former Kickboxing champ Goussis, 40, of Geelong was found guilty of Moran’s murder on 29 May 2008 in the Victorian Supreme Court. Goussis had stormed into the Brunswick Club and shot Moran as he cowered in a corner. Goussis and two others reportedly accepted a $150,000 contract from Tony Mokbel to kill Moran, the Victorian Supreme Court heard. After five days deliberation, the jury also found Goussis guilty of intentionally causing serious injury to Wrout, but not guilty of his attempted murder. Goussis was also convicted of murdering Caine. In February 2009, Goussis was sentenced to a minimum 30 years in prison for Moran’s murder. Lewis Moran was suspected in ordering the death of underworld Hitman Dino Dibra. On 7 May 2007, Carl Williams was convicted of commissioning Lewis Moran’s murder, and sentenced to 25 years’ imprisonment. Williams died in Barwon prison, on 19 April 2010, as the result of an attack by a fellow inmate.