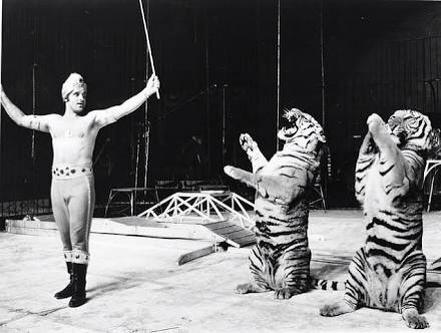 A police force equipped with, rifles was called out at 3am on the 2nd of April 1945, to fight two tigers and a mandrill (a large sized; monkey) which escaped from their cages 21 miles from Inverell. The animals belonged to Perry Bros.’ Circus, and the cages were smashed in a road accident. When the police arrived at the scene they heard a woman screaming in, a house some distance from the road. In the bright moonlight they saw one tiger coming from the direction of the house, and Sergeant Toone and Constable Moore both scored fatal hits. A second tiger was then seen tearing at the body of the mandrill, which it had killed. When it came bounding towards the police officers, Sergeant Toone and Constable Book scored bull’s eyes’. The tiger jumped high in the air with a roar and crashed to death. The screaming woman was Mrs W. Dean, who was in the house with four children. Her husband, was away rabbiting. A year-old baby was sleeping with Mrs, Dean, and two boys and a girl, aged 10, eight and three, were sleeping on the open verandah. She saw the tiger when she rose to investigate the fleece barking of a dog, and was just in time to see the animal leap in the fowl run and kill a number of fowls. In a frenzy she dashed for the children. She bundled her daughter in side from the back verandah and her sons from the front verandah, slamming the front door in the tiger’s face as it ambled up the pathway. She closed all windows and barricaded the door. She heard, the tiger slump down at the door as though to guard. It went away just as the police arrived by car. The tigers were valued at £300 each, and the mandrill at £500. They are a serious loss to the circus people.

Defence of a Woman
Scroll to top Book online now!