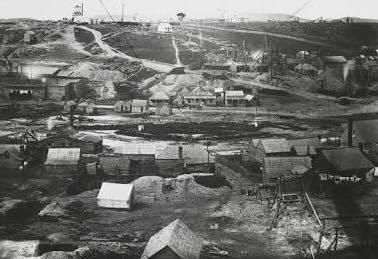 A miner named Louis Cahoon, residing at Twist’s Creek was attacked by a lunatic who had escape from the Beechworth Asylum. While on his way to a neighbour house on this day in 1877, at 6 pm, was violently attacked in the dark.  As Cahoon was passing through a gate he saw a man hiding behind one of the posts. Not thinking of any harm, he simply said ‘Good night,’ but had scarcely finished his salutation with the man, whom he afterwards recognised as a Chinaman sprang at him, and a knife gleamed in his hand in the starlight as it went straight for his heart. Cahoon, who is a large man, and understands how to protest himself in an ordinary encounter, instinctively threw himself into self defence. But still received a stab in his left arm above the wrist and countering his assailant with the right, under the jaw, sent him to ground. Like lightning the maniac, for such he proved to be was on his feet, and again rushing at Cahoon repeated the stabbing, which he received this time in his left hand, near the thumb, and again countering, felled him, but this time so heavily that he did not arise so quickly. Seeing matter so desperate, Cahoon then armed himself with a stick, and again knocked his would be assassin down as be came on for a third time, but not before Cahoon, in delivering his last blow, received a third stab, this time in the right arm. This seemed to bring the Chinaman to his senses, for on his recovering his feet on this occasion he made off into the darkness, and was not arrested until 21st of April, when Mounted constable Shoebridge traced him to Rocky Point. Luckily for Cahoon, and not a little owing to his determination, the wounds are not serious, as the knife was stopped by the bone, and the others being merely superficial.

On The Run
Scroll to top Book online now!