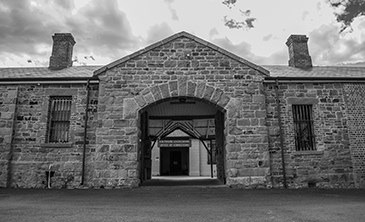 The last sentence of the law was carried out at the Castlemaine Gaol, on the body of Pierre Borhuu, for the murder of Mrs. Smith, of Kangaroo Flat, Sandhurst. Which took place on the 28th April 1872. Pierre Borhuu was a native of Guernsey, his parents, who are still alive and residing at North St. Denis, being French. He was brought up on the sea, and had for some years followed his calling on the coast of England. He arrived in this colony in 1868, and shortly afterwards came onto Sandhurst, taking up his abode in Sunrise Gully, Kangaroo Flat. Here he worked as an alluvial miner, and was very successful, but generally managed to spend most of his gains in the public-House owned by Mr. Smith, the husband of the criminal’s victim. It was during one of his mad paroxysms of drink that he committed the deed for which he has suffered. Since his incarceration at Castlemaine he has behaved himself remarkably well, and frequently expressed his regret for his hasty and intemperate conduct. At 8am the Rev. Father Allen went into the condemned cell, and the irons having been struck off the criminal, the two remained in religious exercises and administering the last offices of the Roman Catholic Church till the arrival of the sheriff. At 10am precisely Mr. Colles knocked at the door of the condemned cell, and demanded the body of the murderer, who was then delivered over to the executioner William Bamford. He was at once pinioned and conducted to the scaffold, the unfortunate man walking with a firm step, and even a smile of resignation on his face. During this time the attendant priest was reciting the prayers for the dead. The white cap was then placed on Borhuu’s face as far as the eyebrows, and the rope put round his neck, but here Bamford bungled the matter considerably by running the hitch so tight as to half strangle his victim before he fell, and thus prevent the knot slipping into its proper place on the fall of the body. Having placed the man in his proper position, the bolt was drawn, and, with a dull heavy thud, the body fell, and the criminal was launched into eternity. For some minutes there was a convulsive twitching of the limbs, death not taking place instantaneously, owing no doubt to the cause abovementioned. The body swung half round, so that the features were not visible to the spectators, but beyond a swelling of the tongue, which protruded slightly, there was little disfigurement. There were about 20 spectators, most of whom were the gaol officials. After hanging the customary time, the body was cut down, and an inquest held on the remains. The usual verdict was returned, and the body then buried within the precincts of the gaol.

Photo of the Castlemaine Gaol