The trial of Ah Wing for the murder of Quong See, with an axe, on May 3, takes place at Sale on Thursday next, and 15 European and Chinese witnesses left here this morning by special coach for Sale. Mr. Conant, retained by the Crown, will appear for Ah Wing. The prisoner, who attempted to commit suicide by jumping down a shaft 100 ft. deep, sustaining severe injuries, left last week. In charge of Sergeant Pfundt. The defence will be that the prisoner was insane at the time the murder was committed.

Leo Alexander Willard, of Newtown, was sentenced to one month’ imprisonment in Geelong for having stolen a bicycle, the property of Francis Martini. The machine was taken from a Geelong West industry. Constable Child, of Footscray, said that Willard called at the Footscray police station to give himself up, saying he had “pinched” a bicycle at Geelong West. Willard had said that he met a girl and prevailed upon her not to go to work, but to go for a bicycle ride in the country. They rode some miles out, became tired, and then left the bicycle and obtained a lift to Melbourne.

His Excellency the Governor of Victoria, on this day in 1851 appointed Mr James Ashley to be Gaoler at Geelong, Jonathan Clarke, to be medical Officer and Foster Ryan’s, to be the visiting Justice of the Gaol at Geelong.

For many years, Van Diemen’s Land (now Tasmania) was thought to be part of the mainland of Australia. In January 1799 Bass and Flinders completed their circumnavigation of Tasmania, proving it to be an island. As an island, Tasmania enjoyed the uniqueness of its own fauna and flora, and its own indigenous peoples, but all of these were severely disrupted by the arrival of Europeans. Van Diemen’s Land was settled as a separate colony in 1803. 3 May 1804 marks the first of the major hostilities between whites and Aborigines which ultimately led to the decimation of pure-blooded Tasmanian Aborigines. What became known as The Battle of Risdon began when a large group of about 300 aboriginal men on a kangaroo hunt inadvertently wandered into the British settlement. Thinking they were being attacked, the soldiers fired upon the party, killing three of the hunters. Debate has continued over the number of hunters actually killed. While early accounts said that two or three were killed, later the figure was expanded to fifty, and then upwards to 100.

In folklore, the Loch Ness Monster is a being which reputedly inhabits Loch Ness in the Scottish Highlands. It is similar to other supposed lake monsters in Scotland and elsewhere, although its description varies; it is described by most as large. Popular interest and belief in the creature has varied since it was brought to worldwide attention in 1933. Evidence of its existence is anecdotal, with few, disputed photographs and sonar readings.

The most common speculation among believers is that the creature represents a line of long-surviving plesiosaurs.  Most of the scientific community regards the Loch Ness Monster as a myth, explaining sightings as misidentifications of mundane objects, hoaxes, and wishful thinking. The creature has been affectionately called Nessie since the 1940s.

The word “monster” was reportedly applied for the first time to the creature on 2 May 1933 by Alex Campbell, water bailiff for Loch Ness and a part-time journalist, in an Inverness Courier report.  On 4 August 1933 the Courier published a report by Londoner George Spicer that several weeks earlier, while they were driving around the loch, he and his wife saw “the nearest approach to a dragon or pre-historic animal that I have ever seen in my life” trundling across the road toward the loch with “an animal” in its mouth.  Letters began appearing in the Courier, often anonymously, claiming land or water sightings by the writer, their family or acquaintances or remembered stories.  The accounts reached the media, which described a “monster fish”, “sea serpent”, or “dragon” and eventually settled on “Loch Ness monster”.

On 6 December 1933 the first purported photograph of the monster, taken by Hugh Gray, was published in the Daily Express; the Secretary of State for Scotland soon ordered police to prevent any attacks on it.  In 1934, interest was further piqued by the “surgeon’s photograph”. That year, R. T. Gould published an account of the author’s investigation and a record of reports predating 1933. Other authors have claimed sightings of the monster dating to the sixth century AD. 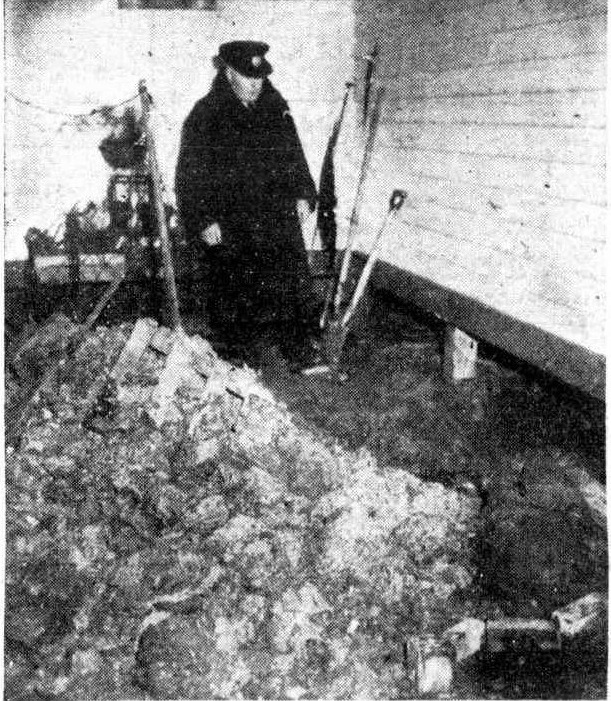 The body of a 30-year old married woman was found by detectives to-night buried in a three-foot grave under a house in East Oakleigh. The dead woman was Mrs. Mary Godwin, who had been missing since May 2. She was the mother of four children, the eldest nine and the youngest four.

MAN ALLEGED TO HAVE BURIED WIFE

William Francis Godwin, 34, had shot his wife, burled her body under the passage of his home, and then lived with her sister, witness alleged at the Coroner’s Court today. Godwin, who pleaded not guilty, and reserved his defence, was committed for trial on a charge of having murdered Mary Godwin, 33, mother of five young children at their home in East Oakleigh, on May 2.

Committing Leslie Bennett, motor driver, of Preston, for trial on a charge of manslaughter today, the Coroner (Mr. A. C. Tingate) found that the deaths of Mrs. Marguerita Nesbitt (44), and her daughter, Marjorie, aged 10, who were passengers in Bennett’s truck when it over turned on May 2, were directly attributable to Bennett’s negligent driving.

Darcy Irvine, aged 19, a motor mechanic, was arrested today on a charge of the manslaughter of James Hannan. The deceased man was was found on the road near Warrnambool on May 2, and died in hospital from heart failure, following exposure.

At Geelong, a man named John Bell was arrested on warrant, immediately on his discharge from Geelong gaol, and charged with obtaining horses at Cobargo, New South Wales, under false pretences in June, 1899. He has been remanded for a week.