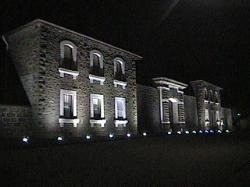 William Augustine McEntee aged 39 was arrested in Stawell on the 1st June 1932 on a charge of unlawful possession of a car. He was also wanted in Adelaide on a charge of having absconded from Gaol. He has convictions dating back to 1915 for shop breaking, larceny, unlawful possession, false pretences, and horse stealing. McEntee was committed to the criminal ward of Ararat Asylum. On the 19th of June 1932, McEntee broke out of his cell and escaped. Staff were amazed and puzzled at the disappearance of McEntee. “God knows how he did it,” said a warden, when asked over the telephone from Melbourne how it was possible for McEntee; have got away undetected. ” One of the most amazed men was the head warden who, a quarter of an hour before, had given McEntee his lunch. At that time the cell was locked and secure, shortly afterwards, while walking along the corridor, was surprised to find the cell door open and McEntee missing. He was described as being very cunning and dangerous criminal. McEntee remained on the run for all must 12 months, before he was court and sent to the Beechworth Gaol. On the 5th of February 1940, William McEntee, made his third escape when he scaled a 15ft wall of the Beechworth Gaol and rode away on a bicycle he obtained in the town. McEntee was arrested in Sydney on the 23rd of December 1942, and charged with breaking and entering and theft of £1000 worth of properly. While being interview by police it was realised that McEntee, had escaped from Beechworth Gaol, and been on the run for nearly three years. He was sentenced to gaol again.