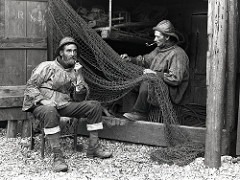 The inquest touching the death of Donald McDonald, the murdered fisherman, near Tyntynder, was resumed on Monday morning. A number of witnesses were examined, the most important being John M’Donald and Joseph Wells. The former gave evidence respecting the ill-feeling that existed between himself and the deceased. He went to the deceased’s hut, and charged him with cheating while they were in partnership together, and asked to see the returns, but would not go inside the hut as he was frightened of the deceased doing him some injury, as he had threatened to shoot several persons whom he had a spite against. He (witness) confessed to having used threats against the deceased. A man named Thompson told witness that the deceased had said that he was not honest and that he might have replied, ” I’ll let him see whether he is honest or not if I catch him in a quiet corner.” Constable Egglestone and Sergeant Mahoney gave an account of tracking the prisoner to Oxley and finding burnt caps and cartridges in the camp fire, and the barrel of a gun a short distance off. Joseph Wells said that he found the prisoner at his camp on July 19. He told him that he had come from Donald M’Donald’s hut, and talked about the deceased and larrikin fishermen, and that he should not be surprised to hear of a fisherman being shot. The inquiry was adjourned to October 4,