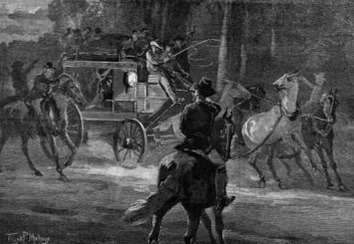 The legendary ‘Black Douglas’ Charles Russell was an English-born bushranger who held Melbourne and its surrounding areas to ransom during the 1850s. Russell preyed on those diggers travelling to and from the goldfields between Bendigo and Melbourne. There are several accounts of victims being tied naked to a tree or fallen log with their boots full of bull ants, left to die a slow and excruciating death. He reportedly led a gang of 16 bushrangers who worked together in their marauding. Their camp was strategically located a few kilometres away from the Alma minefields in Maryborough, Victoria. Eventually, a frustrated group of nearly 200 diggers burnt their camp to the ground and overpowered Russell in May 1855. He was 75-years-old when he died in Bendigo gaol in 1892.