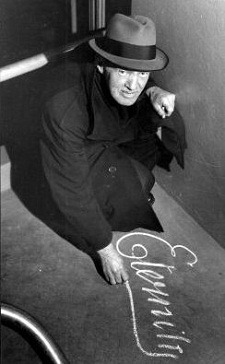 Arthur Stace was born in Balmain, Sydney, in 1884. Growing up in a family of alcoholics, he fended for himself most of the time and also turned to drink. He returned from WWI shell-shocked, turning to a life of petty crime and a drinking habit that included cheap methylated spirits. One night, lured by the offer of a free cup of tea and something to eat up at a nearby Church Hall, he found himself at a meeting being conducted by Archdeacon R.B.S. Hammond of St Barnabas’ Church on Broadway. Stace was immediately captivated by the message of Christianity, and the model offered by the man proclaiming the message. He was converted that very night. Shortly after his conversion, Stace was listening to the evangelist John Ridley at the Burton Street Baptist Church. Ridley told of a man who was converted in Scotland through ‘Eternity’ being written on a footpath. Ridley called for someone to write Eternity on the footpaths of Sydney, and Stace knew that this was something he could do for God, to alert people to the condition of their own souls. For 37 years, he chalked ‘Eternity’ on footpaths throughout Sydney in a uniquely copperplate style, vastly different from his own usual scrawled style of writing.
Arthur Stace died of a stroke at age 87 on the 30th of July 1967. Ten years after he died, Ridley Smith, architect of Sydney Square, set the message ETERNITY in letters almost 21cm high in wrought aluminium, near the Sydney Square waterfall. On the 1st of January 2000, the worldwide telecast of millennium celebrations showed the Sydney Harbour Bridge alight with the word ‘Eternity’ in flowing copperplate, still proclaiming Stace’s message to the world.