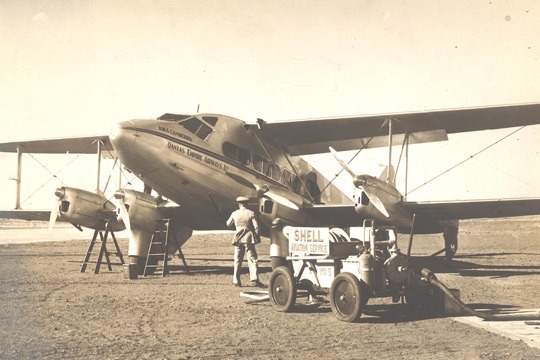 Qantas is Australia’s national airline service and the name was formerly an acronym for “Queensland and Northern Territory Aerial Services”. Qantas was born out of a need to bring regular passenger services to remote communities. W Hudson Fysh and Paul McGinness, former Australian Flying Corps officers who had served at Gallipoli, had the inspiration after their plans to enter a major air race fell through. In March 1919, the Australian Federal Government offered a £10,000 prize for the first Australians to fly from England to Australia within 30 days. Necessary funding for the two war veterans was cancelled when wealthy grazier and sponsor, Sir Samuel McCaughey, died before the money could be delivered, and his estate refused to release the promised funds. Undaunted, Fysh and McGinness undertook an assignment from the Defence Department to survey part of the route of the race, travelling almost 2200km from Longreach in northwestern Queensland to Katherine in the Northern Territory in a Model T Ford. The journey took 51 days and covered territory which no motor vehicle had negotiated before, and the difficulties highlighted the need for a regular aerial service to link remote settlements in the Australian outback. Fysh and McGinness gained sponsorship for a regular air service from wealthy grazier Fergus McMaster, whom McGinness had once assisted in the remote outback when his car broke an axle. As a regular traveller through difficult terrain, McMaster needed no convincing, and even secured further investment from his own business acquaintances. Originally purchased under the name of The Queensland and Northern Territory Aerial Services, or Qantas, was launched in November 1920, with McMaster as Chairman. Based in Winton, western Queensland, the original Qantas fleet was made up of just two biplanes: an Avro 504K with a 100 horsepower water-cooled Sunbeam Dyak engine and a Royal Aircraft Factory BE2E with a 90 horsepower air-cooled engine. The men’s former flight sergeant Arthur Baird was signed on as aircraft mechanic. Initially, the service operated just for joyrides and demonstrations. Qantas commenced its first regular airmail and passenger service, between Cloncurry and Charleville in November 1922, and in 1925 extended the service another 400km west to Camooweal. Mechanic Arthur Baird was placed in charge of a building programme in 1926. The first aircraft, a DH50A, was turned out under the Qantas banner on 8 August 1926. This was the first time an aircraft had been built in Australia under licence from overseas manufacturers.

Murder at the Southern Cross Restaurant