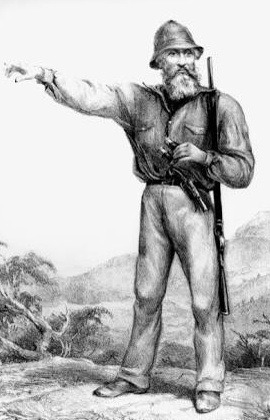 The Burke and Wills expedition was supposed to mark the state of Victoria’s greatest triumph: Victoria hoped to be the first state to mount an expedition to cross the continent from south to north. Instead, due to mismanagement and lack of clear communication, three of the four members of the party who finally made the attempt to cross to the gulf and back, never made it back. Robert O’Hara Burke, William John Wills and Charles Gray all died. John King alone survived, after being taken in and nursed by the Aborigines of the Cooper Creek area. Although the expedition had been financed by the colony of Victoria, several other states mounted their own rescue missions for Burke and Wills, who were long overdue to return. John McKinlay, born at Sandbank on the Clyde in 1819, first came to New South Wales in 1836. He joined his uncle, a wealthy grazier, under whose guidance he soon gained practical bush skills, and then took up several runs in South Australia. McKinlay was chosen to head up the South Australian relief expedition for Burke and Wills, setting out from Adelaide on 16 August 1861. During the course of his search, McKinlay’s journals show that he crossed the continent from south to north, then east and back again, possibly making McKinlay the uncredited first explorer to cross the continent and survive. The remains of Burke and Wills were eventually located by the Victorian relief expedition.