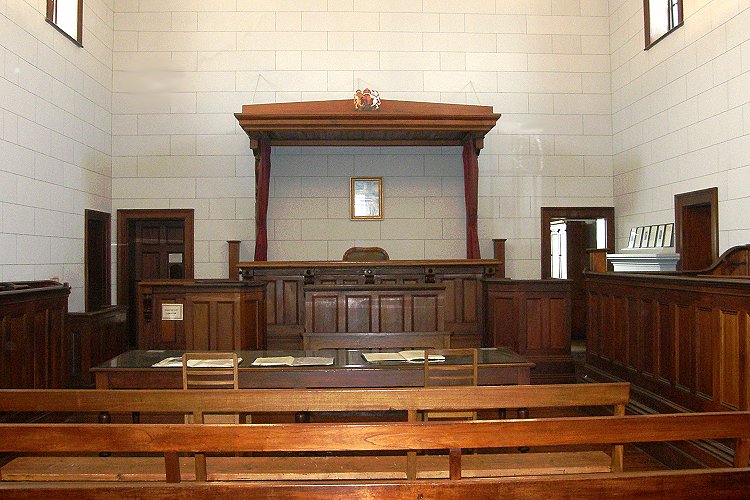 On Tuesday the 16th October 1855 John McCabe was found guilty of the wilful murder of Lewis Walker at Snake Valley. Lewis who was once an officer in the army had come to the diggings where he made a considerable sum of money, until the mine he was working with Sherwin collapsed, losing everything. On the 28th of August 1855 both Lewis and Sherwin stopped at John’s house where they resided for 3 nights. On the night of the 31st August, when Lewis was asleep, John struck him in the head with an axe, which caused instantaneous death. Sherwin at the time was very drunk and slept through the attack. Afterwards John went to the Bush Inn, and on being asked where Lewis and Sherwin were, he replied he had left them fighting in his hut. At first it was believed that Sherwin had murdered Lewis, and was taken into custody but later released and the sentence of death was passed onto McCabe. John was tried at the Supreme Court in Beechworth by the Honour Justice Williams and was found guilty by a jury of his countrymen, and was condemned to suffer the extreme penalty of the Law. However during the hearing John had no legal representative even though he had hired and paid for Mr Campbell as his defence. For some unknown reason, through want of time or through neglect, the solicitor did not make his appearance in time for the trial. At this point in time John had been in prison for thirteen days. On the day of the trial John had not been able to instruct a second Attorney. The prisoner attempted to obtain the services of Dr Mackey, barrister, but Mackey had no time to make himself acquainted even with the facts of the case at the time proceedings commenced. Dr Mackey applied, under the very serious nature of the charge, for a postponement of the trial until the following session of Court. His application was successfully opposed by the Crown prosecutor on the grounds of expense, the difficulty in securing all the witnesses at another time and the minute precognition that had been made before the magistrates at Beechworth. Dr Mackey then applied to have the trial postponed for a day, that he might have time to peruse the voluminous depositions, but with no better success. Dr Mackey next applied for an hour’s delay but this application was equally unavailing. Given the circumstances, Dr Mackey declined the responsibility of defending the prisoner. John then applied to the learned Judge to assign him counsel, but his Honor could not direct any counsel to undertake such a responsibility. Therefore, John did not obtain the services of counsel at all, while the full weight of the law was allowed to proceed.

John was sentenced to hang on the 24th of October 1855 in Central Gaol Melbourne. However due to the injustice carried out in the Court room, a petition was signed and delivered with a letter to the Governor General of Victoria, His Excellency Sir Charles Hotham. The petition urged the Governor General to extend the royal prerogative of mercy to the convict John McCabe. John was saved and released, returning once again as the local butcher.