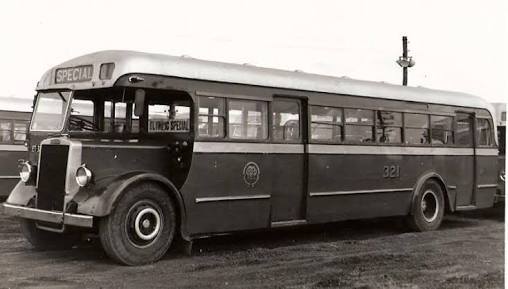 On This Day – September 2, 1954
A stolen, 23-passenger bus ploughed into a 22,000-volt power line in the outer suburb of Bundoora at 9.30 p.m. today, blacking out three mental hospitals and plunging 11 towns over 400 square miles into darkness.
The driver narrowly escaped electrocution as power lines fell around the bus after it had capsized.  The impact was so great that the front wheels were ripped off, the engine hurled from the bus and the top four feet of the heavy power pole snapped off.
The thief scrambled from the glass-littered cabin and fled. Doctors and nurses at the Bundoora, Larundel and Mont Park mental hospitals worked by lantern light, candles and torches to sooth and tend frightened patients during the night State Electricity Commission gangs do not expect to restore power until 6 pm tomorrow.
An SEC spokesman said the thief chose the worst possible pole to crash into. The pole carried the main feeder from the Thomastown power station.
Poultry farmers fear heavy losses due to the failure of lights and incubators.
02/09/2016/by Limelight
https://twistedhistory.net.au/wp-content/uploads/2016/09/14212833_10209518245055034_1811161698196864600_n.jpg 289 508 Limelight https://twistedhistory.net.au/wp-content/uploads/2018/10/Twisted-Logo-Tranparent-no-shadow.png Limelight2016-09-02 00:00:492016-09-02 00:22:08Stolen Bus Blacks Out 11 Towns