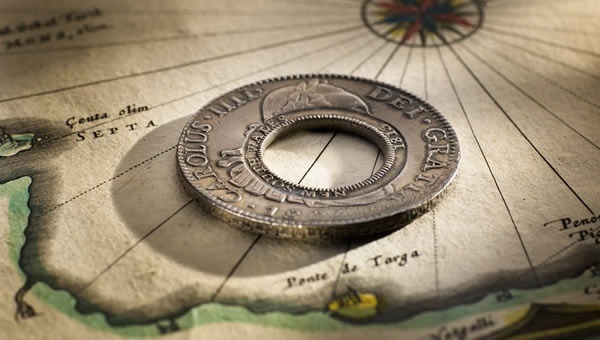 The coins “holey dollar” and “dump” were created by punching the centre out of Spanish dollars. The external circle was the “holey dollar” and the punched-out inner circle was the “dump”. They were only ever used in New South Wales, Australia, and on Prince Edward Island, Canada. In 1813, Governor Lachlan Macquarie faced the problem of currency shortages in the young colony of New South Wales. When the British Government sent £10,000 worth of Spanish dollars (40,000 Spanish dollars) to New South Wales, Maquarie took the initiative to create “holey dollars” and “dumps”. The dumps were assigned a value of 15 pence and were restruck with a crown on the obverse side and the denomination on the reverse. The dollars were worth 5 shillings, and were stamped with “New South Wales 1813” around the hole. The coins were released on 30 September 1813. The holey dollar became the first official currency produced specifically for circulation in Australia. The coins were replaced by sterling coinage from 1822.