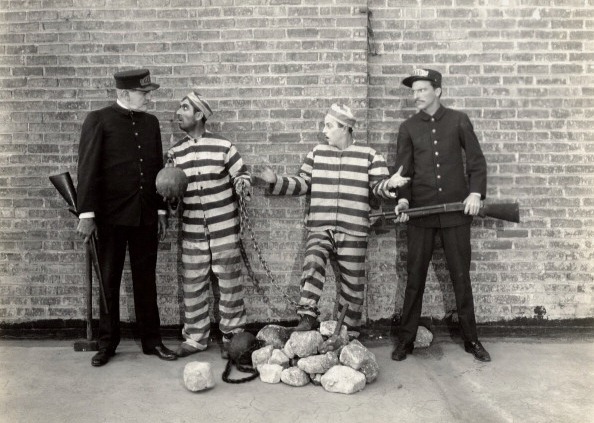 An escape was made by two prisoners from the gaol, named William Henry Thompson and Thomas Reynolds. The former was undergoing a sentence of three years for stealing in the Queen’s Head Hotel, and had been in confinement about fourteen months ; the latter was also undergoing a similar sentence for assaulting an old man and had served half his time. It appears that the prisoners acted as cooks, and at a quarter to six o’clock were let into the kitchen to prepare breakfast. The kitchen is situated in the new wing of the building, and is the only part of it which is not surrounded by the high wall. The windows are protected by strong iron bars, about six inches apart, and which were supposed to be imbedded into the bluestone some two and a half inches. One inch, however, was all that the bar, which was wrenched by the aid of two pieces of wood, had been so fixed. At a few minutes before six one of the warders on his way to the gaol noticed three men standing near to the Pivot Hotel, about a hundred yards from the gaol, fancying that one of them was like Reynolds, he challenged him, saying, “Is that you, Reynolds?” The words were no sooner uttered than the three men separated, the stranger making tracks towards town, and Thompson making a bolt towards Chilwell. The warder, whose name was Kerley, let them go, but made sure of Reynolds, and at a quarter past six that worthy was comfortably ‘installed in his cell. Another of the warders coming across the flat noticed Thompson, and identified him as a prisoner by the brand on his trousers. He immediately started in pursuit, and Thompson, who ran like a deer, headed towards Chilwell, brandishing a knife before him. The chase lasted for a mile and a half, while in turning to attract the attention of the police the warder missed sight of Thompson, who had cleared a fence in gallant style, and disappeared in a Mr. Dobson’s garden, near the Cremorne Hotel. Here the scent was lost, but there is little doubt that Thompson, who is a most desperate character, will soon be safely lodged in the gaol, as active search was being made for him yesterday. When last seen he had a small bundle under his arm, supposed to contain a change of clothes. Of the third man nothing, we believe, has been seen. His part in the business, it is supposed, was that of outside assistant.” Reynolds received an additional 12 months while Thompson was recaptured in Adelaide.