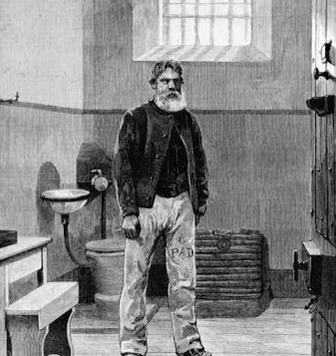 Henry Johnstone alias Harry Power a notorious Victorian bushranger was born in Waterford, England, in 1819. Johnstone was transported to Van Diemen’s Land in 1841 for stealing shoes. During the 1850s and 1860s, he found himself in trouble with the law a number of times for horse stealing and other crimes. His bushranging career began after he escaped from Pentridge Gaol, Melbourne in 1869. Initially he worked alone, but as he set his sights on higher goals of bushranging, he decided he needed an assistant. A friend, Jack Lloyd, told Power of Lloyd’s nephew, Ned Kelly, who was just 15 at the time. Power served as mentor to Ned Kelly, taking him on as an apprentice in 1870 and teaching him the finer arts of bushranging. Jack Lloyd was the one who finally betrayed Power to the local constabulary. Enticed by the 500 pound reward, Lloyd led the police to Power’s hideout at the back of Glenmore Station’s homestead, King Valley in North East Victoria. Power was apprehended and, as his crimes were non-violent, he was sentenced to 15 years’ gaol. Six years after his release, Power drowned when he fell into the Murray River near Swan Hill, on this day in 1891.

SENSATION ON A SHIP – SEAMAN GOES TO GAOL