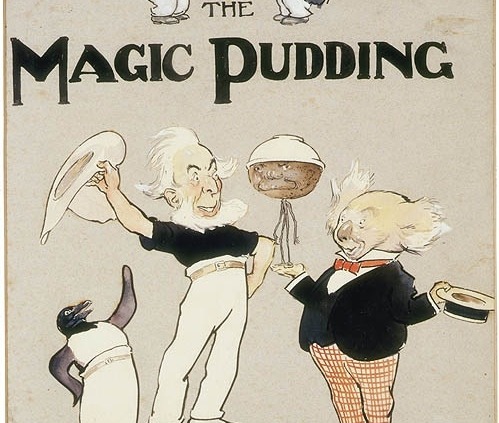 The Magic Pudding is a novel by artist and writer Norman Lindsay, who was known for his unusual and creative approach. Norman Alfred William Lindsay was born on 22 February 1879 in Creswick, Victoria, Australia. He was a skilled artist, and his paintings were controversial for their time, concentrating on nudes, often incorporating pagan themes of gods and goddesses, nymphs and satyrs, in an Australian bush setting. Much of his work, which includes watercolours, lithographs, and etchings, can be found at his former home at Faulconbridge, New South Wales, now the Norman Lindsay Gallery and Museum. As well as his prolific output of paintings, Lindsay was a writer who completed eleven novels between 1913 and 1950. His best known work is possibly “The Magic Pudding”, first published on 12 October 1918. “The Magic Pudding” is a children’s classic about a sarcastic and bad-tempered walking, talking pudding that can be whatever food it wants to be, and eaten without ever running out. The story was originally written by Lindsay as a means to take his mind off World War I and the tragic loss of his brother at the Somme. The storyline itself was the result of an argument between Lindsay and another writer, Bertram Stevens. Stevens was convinced that children were drawn to stories about fairies: Lindsay believed that food was the drawcard. The ultimate success of Linday’s novel would suggest that he was correct. Despite Lindsay’s own criticism of it, calling it a ‘little bundle of piffle’, “The Magic Pudding” went on to become an Australian classic, enduring for many generations beyond Lindsay’s lifetime.