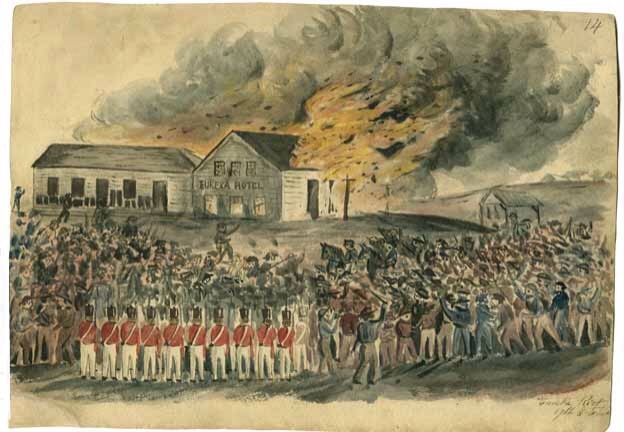 On the 17th of October 1854, 10,000 miners gathered at Bentley’s Eureka Hotel on the Goldfields of Ballarat, Victoria to protest the acquittal of James Bentley, the hotel proprietor and prime suspect in the murder of Scottish miner James Scobie, by an allegedly corrupt magistrate. The miners rioted and Bentley and his wife Catherine fled for their lives as the hotel was burnt down by the angry mob. A small group of soldiers were unable to suppress the riot. This event would lead onto the battle of the Eureka Stockade, which was fought between miners and the Colonial forces of Australia on the 3rd of December 1854 at Eureka Lead, Ballarat. The rebellion lasted for less than half an hour and resulted in the deaths of at least 27 people, the majority of whom were rebels.