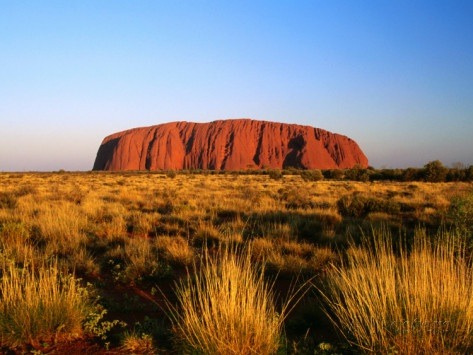 Uluru, in central Australia, is an inselberg, often referred to as the second largest monolith in the world, second only to Mt Augustus which is also in Australia. Also known as Ayers Rock, it was named after the former Premier of South Australia, Sir Henry Ayers by William Gosse, of the South Australian Survey Department, who became the first European explorer to see Ayers Rock. Gosse sighted Ayers Rock on 18 July 1873, recording that, “This rock is certainly the most wonderful natural feature I have ever seen”. The indigenous people of central Australia have known about the feature for many thousands of years. Uluru, which is believed to mean either ‘Great pebble’ or ‘Meeting place’, is sacred to the Aborigines. On 26 October 1985, ownership of Uluru was returned to the local Pitjantjatjara Aborigines. One of the conditions was that the Anangu would lease it back to the National Parks and Wildlife for 99 years and that it would be jointly managed.