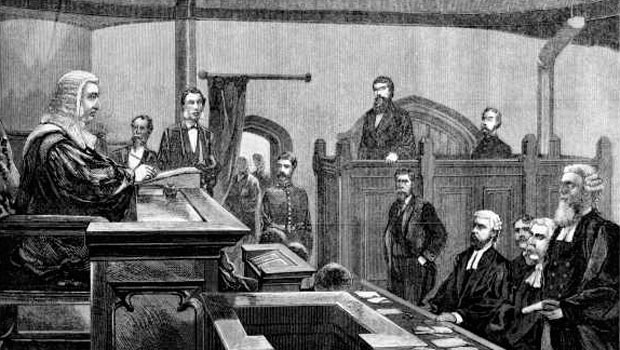 Ned Kelly first stood trial on 19 October 1880 in Melbourne before the Irish-born judge Justice Sir Redmond Barry. Mr Smyth and Mr Chomley appeared for the crown and Mr Bindon for the prisoner. The trial was adjourned to 28 October, when Kelly was presented on the charge of the murder of Sergeant Kennedy, Constable Scanlan and Lonigan, the various bank robberies, the murder of Sherritt, resisting arrest at Glenrowan and with a long list of minor charges. He was convicted of the willful murder of Constable Lonigan and was sentenced to death by hanging by Justice Barry. Several unusual exchanges between Kelly and the judge included the judge’s customary words “May God have mercy on your soul”, to which Kelly replied “I will go a little further than that, and say I will see you there where I go.” At Kelly’s request, his picture was taken and he was granted farewell interviews with family members. His mother’s last words to him were reported to be “Mind you die like a Kelly.”