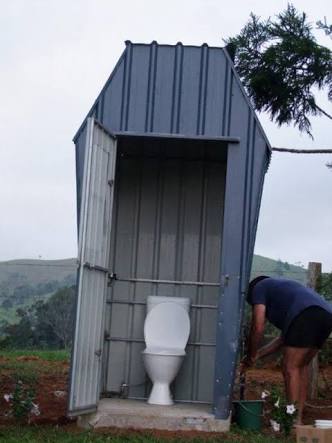 The town of Millaa Millaa, in Queensland, Australia, came up with a killer idea for national coverage and tourist attraction at their town cemetery. A new toilet was needed at the graveyard and the council was quoted more than $80,000. Not to be killed in their tracks the local Chamber of Commerce decided to just build one themselves. Undertaking the gravely task their build a coffin shape toilet “crap crypt”. Problem is, now that this eternal restroom has been built, some townsfolk are dying of embarrassment. “You have to be careful, not everyone is going to have our macabre sense of humour,” Chamber president Pat Reynolds told the Herald Sun newspaper. “But we did it with good intentions. It’s for firstly, the cemetery, and secondly, maybe a few more people will notice Millaa Millaa now.” The builders made sure not to do a crappy job on the toilet, providing a septic system, solid cement foundation, and strong walls, one of which bears a cross and the letters RIP, according to the Courier-Mail newspaper. Not everyone likes the idea. Brian Norton was dead set against the tombstone toilet and wrote a letter to officials expressing his grave concerns. “Imagine if they had a funeral there,” he said. “I don’t think it’s going to go over very well, especially if people are there from out of town. They’ll think, ‘What sort of place is this?'”