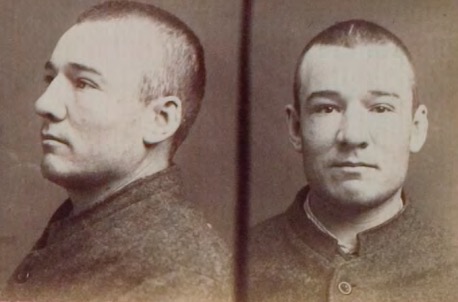 A desperate affray occurred within the gaol walls last night, which almost ended in a tragedy. Whilst one of the warders was searching the prisoners in their cells prior to their being locked up for the night, he was startled, on entering the cell occupied by a notoriously dangerous criminal named Edwards, alias Percy Ramage, to see him endeavouring to cut his throat with a small knife, which he had managed to conceal about his clothing. The warder made a rush for him, and they closed, the prisoner, who is a powerful ruffian, lifting the warder up bodily and attempting to throw him over the railing into the corridor several feet below. The calls of the warder brought assistance just in time to prevent Edwards from carrying out his design. Even then it was only with the greatest difficulty that he was overpowered, the assistance of several prisoners being invoked in addition to the efforts of four warders. Ramage was removed to a special cell, and the gaol medical officer attended to the wounds in his throat, which were not of a very serious nature. The prisoner, who is undergoing a long sentence for a murderous assault committed on Constable Luke when he was stationed in Melbourne, will be brought before the visiting magistrates. A notorious prisoner named Cutmore committed suicide, another youthful prisoner named Gregory was overheard to express his intention of cutting his throat, and on being searched a piece of sharpened steel was found concealed in his clothing. He will found concealed in his clothing. He will also be brought before the visiting justice.