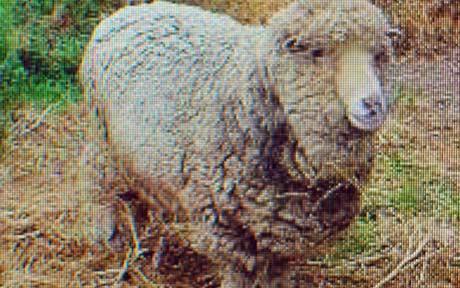 The average life-expectancy of sheep ranges between ten and twenty years. Not so for Lucky, the world’s oldest sheep, who died at the age of 23. Lucky was a hand-reared sheep who lived on a farm at Lake Bolac, west of Ballarat, Victoria. She had been abandoned by her mother at birth, and rescued by farmer Delrae Westgarth who found her out in the paddock. Westgarth and her husband Frank cared for the lamb, feeding her in their house and then moving her to the shed until she was old enough to join the flock. Lucky produced 35 lambs of her own in the following decades. In late Spring of 2009, exceptionally hot weather weakened her and caused her health to deteriorate. Although her owners brought her back to the shed, cooling her down with air conditioners, she died on Monday 23 November 2009, aged 23 years, six months and 28 days. This was a Guinness-certified world record age for a sheep. Lucky was buried under her favourite nectarine tree.