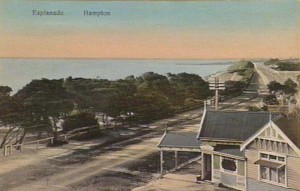 Douglas Robertson, aged 33 years, a skilled Worker, who was arrested at Sydney and, later charged at Melbourne with having murdered William Frederick Charles Almeida, bank teller, at Hampton, on November 24, 1924, was to-day again remanded.

William Almeida was a teller of the Hampton agency of the Commercial Bank of Australia, when he was shot during a raid on the bank in Hampton street by three men.  He later died in the Creswick House Private Hospital from his wounds.