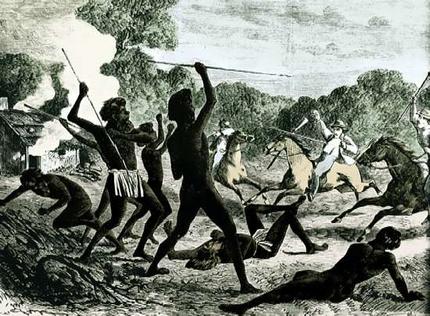 On 10 June 1838, a gang of stockmen, heavily armed, rounded up between 40 and 50 Aboriginal women, children and elderly men at Henry Dangar’s Myall Creek Station, not far from Inverell in New South Wales. 28 Aborigines were murdered. These were the relatives of the Aboriginal men who were working with the station manager, William Hobbs. It was believed that the massacre was payback for the killing of several colonists in the area, yet most of those massacred were women and children. At a trial held on November 15 that year, twelve Europeans were charged with murder but acquitted. Following uproar from some colonists at the aquittal of the men, another trial was held on 26 November 1838. Following the retrial, 7 men were charged with murder and sentenced to be hung in December, under the authority of Governor George Gipps.