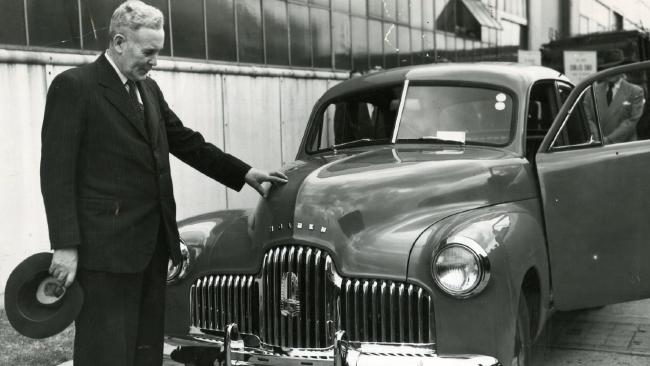 “Made in Australia, For Australia”.

These are the words spoken by Australian Prime Minister Ben Chifley when he launched the Holden FX on 29 November 1948. The real name of the Holden FX is 48/215. ’48 was the year it started production, and 215 indicated a Standard Sedan. The name “FX” originated as an unofficial designation within Holden after 1953, and was a reference to the updated suspension of that year. The Holden company began as ‘J.A. Holden & Co’, a saddlery business in 1856, and moved into car production in 1908. By 1926, Holden had an assembly plant in each of Australia’s mainland states, but due to the repercussions of the great Depression, production fell dramatically, from 34,000 units annually in 1930 to just 1,651 units in 1931. In that year, it became a subsidiary of the US-based General Motors (GM). Post-World War II Australia was a time when only one in eight people owned an automobile, and many of these were American styled cars. Prior to the close of World War II, the Australian Government put into place initiatives to encourage an Australian automotive industry. Both GM and Ford responded to the government, making proposals for the production of the first Australian designed car. Although Ford’s outline was preferred by the government, the Holden proposal required less financial assistance. Holden’s managing director, Laurence Hartnett, wished to develop a local design, but GM wanted an American design. Compromises were made, and the final design was based on a previously rejected post-war proposed Chevrolet. Thus, in 1948, the Holden was launched – the first mass-produced Australian car. Although the automobile’s official designation was the 48/215, it was marketed as the “Holden”. This was to honour Sir Edward Holden, the company’s first chairman and grandson of J.A. Holden, who established the original Holden saddlery. Other names that were considered included the ‘Austral’, ‘Woomerah’, ‘Boomerang’, ‘Melba’, ‘GeM’, ‘Emu’ and even the ‘Canbra’, a name derived from Australia’s capital city. The original retail price was AU£760.