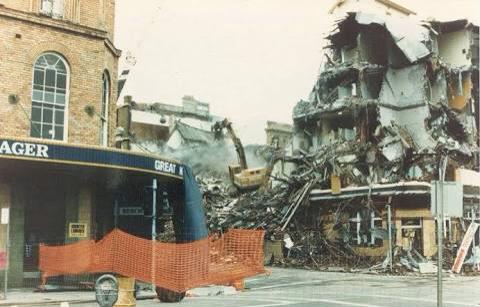 On this day in 1989, thirteen people were killed as Newcastle, New South Wales, is hit by an earthquake. Significant earthquakes in Australia are rare; however, on the 28th of December 1989, an exception to the norm occurred. Australia’s sixth-largest city, Newcastle, situated on the mid New South Wales coast, was hit at 10:27am by an earthquake measuring 5.6 on the Richter scale. Effects of the quake were felt throughout central-eastern New South Wales. There were reports of damage to buildings in Scone, Gladstone and Sydney, the latter some 800km away. The shaking was even felt in tall buildings, in places over 5000km away. Thirteen people were killed, and 35,000 homes, 147 schools and 3,000 other structures in the region collapsed. Most damage, and the highest death toll, occurred at the Newcastle Workers Club when walls and multiple floors collapsed, dropping 300 tonnes of concrete onto the ground-floor car park. Nine people were killed in this one location alone. A US report on the earthquake suggested that the disaster was caused by stress resulting from 200 years of underground coal mining. Australian geoscientists disagree, claiming that the Hunter Valley has been prone to minor earthquakes for years. Other evidence suggests that the hypocentre of the earthquake lay too deep underground – 12 kilometres – for it to have been caused by mining.