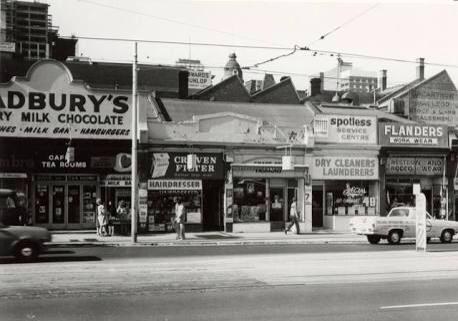 A graphic story of events leading up to and following the killing of Mrs. Edith Rachel Praetz or Walker at her secondhand shop in North Melbourne on December 29, was told by Jean Richards, a young woman who said she was living with an Italian labourer, Antonio Barbara, 35, at the time. Barbara was committed for trial on a charge of murder. Richards told the coroner that after she and Barbara had run away from Mrs. Praetz’ shop, he attacked her with a knife, but it slipped. She grabbed it, threw it away and then escaped herself.

The City Coroner (Mr. Tingate. P.M.) found that at North Melbourne on December 29 Mrs. Edith Rachel Praetz (or Walker) died from the effects of knife wounds in the neck. feloniously and maliciously inflicted by Barbara.

Application for bail was refused. Evidence was given that detectives investigating” the case had been handed the following letter, signed by Barbara: “Sir – Regards Italian you are seeking for in connection with the Victoria street murdered. I am personally writing to you. So you can rely I will call at headquarters. Russell street. not later than noon. Monday, January 4, 1937. “Being a sport follower. I would like to know how the third Test. England v. Australia, starts, as I hope Australia wins the toss, also the match. Wishing you a happy new years. with best respects. Barbara, Antonio.”

Jean Richards. single. said she had known Mrs. Walker for four years, and had stopped at her place several times.. On December 29 she was living with Barbara in North Melbourne. He returned home about 3.30 p.m.. and after an argument about money had become enraged and struck her as she lay on a bed. He had been drinking. She left the house, taking her baby with her and as she was walking along the street Mrs. Walker asked her to go inside. While she was in the kitchen Mrs. Walker came in from the front and told her that someone had gone to tell Tony she was there. “I said I had better go.” continued witness. “but as I was leaving Tony came in. Mrs. Walker asked him ‘What are you doing in my shop? Haven’t the police told you not to come in?’ “Tony replied. ‘You are going to be a copper again.’ Then he knocked her down. “‘I then ran out of the shop.” witness went on. “When I returned Tony had one hand on Mrs. Walker’s shoulder. He picked up a knife from the dresser. and I called out. ‘Tony, don’t. Stop.’ He turned towards me and I ran out on to the footpath. Then Tony came out. took my arm, and told me to come home. He said. ‘Look what she made me do.’ “I turned, and could see Mrs. Walker’s legs protruding from the door. They were bloodstained.

On the way home Richards said that Barbara told her he was going to do for her. too. When they reached his house there were about 10 men in the dining room. Barbara ran into the kitchen and returned with a knife. He pushed witness and her baby to the floor. He held her by the throat with one hand and the knife in the other, but the knife slipped, and, grabbing it, she threw it among the men standing in the room. Two of them tried to drag Barbara away, and while they held him she left the house. Next day she went to the police.

In a statement read by Detective Adam and alleged to have been made by Barbara, the Italian stated that Mrs. Walker had sent for him, and when he went round, she had run at him with the knife. He stepped aside. and she again rushed at him. He grabbed her. and they struggled near the stove. Then he saw blood on her neck, and he and Jean Richards ran away. He met another Italian. who drove him to Werribee. and when he returned to Melbourne he heard that Mrs. Walker had died. He then went to Oakleigh by taxi and wandered round in the bush.

Albert Rainsford, 43, butcher, of North Melbourne, said that the dead woman, who was 51, was his sister. Before her marriage her name was Walker, while she had also been known as Sutcliffe. She conducted a secondhand shop in North Melbourne. Walter Boyce, who said he had been living at Mrs. Walker’s place, stated that after taking a mesage to Barbara that Mrs. Walker wanted to see him, he went for a walk. When he returned he saw Barbara and a woman named Jean Richards running out of the front door. Mrs. Walker was following them and she called out to witness to get the police, as Tony had stabbed her She then fell on the footpath

Newman Spielvogel. pawnbroker, told of his discovery of Mrs. Walker lying on the footpath. He had heard rows and fights at Mrs. Walker’s premises. Death was due to a wound in the neck, which could have been caused by a knife, was the evidence of Dr. Mollison. Government Pathologist. According to First Constable Myers a trail of blood led from the spot where the woman’s body was found to the kitchen of her house, where there was a large pool. In the kitchen he found a large bloodstained knife. on the blade of which there was human hair.