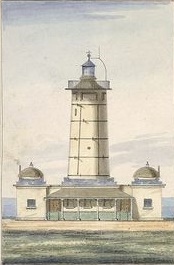 The first lighthouse built in Australia was at Outer South Head, Sydney, in 1817. Victoria’s first, at Cape Otway, did not come till 31 years later (but today is the oldest one in main land Australia), but Tasmania had one in 1833. Nowadays, Australia’s 12,000 miles of coastline have close on 200 lights for the guidance of ships, though not all have permanent keepers. Many lighthouses are far above the sea. The base of the Tasman Island Lighthouse, outside Hobart, is 88 feet above sea-level, and its light 907 feet. The most powerful of lights are at Cape Byron, New South Wales, and at Cape Naturalist, on the north coast of Tasmania. Each of a million candle power, they are seen on clear nights at 30 miles.