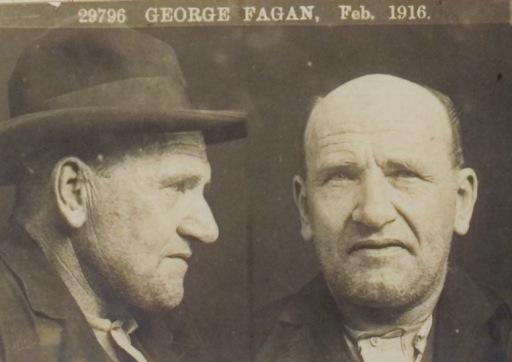 What appears to be a deliberate attempt at murder took place at Cheltenham, Melbourne. A slaughterman, George Fegan, aged 37, went home to his wile, aged 40, and his child, aged 8, and demanded money for drink from the former, who helps to support the family by doing washing. His wife refused to give him any money, and after threatening her he dragged her out of the house into the street; The neighbour heard her cry out as she emerged from the door, “He’ll do for me.” After a few minuces the terrified woman ran across the street, and entered a neighbour’s house, followed by Fegan, and simultaneously the noise of three pistol shots were heard. Fegan then rushed out of the house, crying, “I’ve done for her.” Constable McCarthy, who was on duty in the local station, was informed of the occurrence, and he hastened at once to the scene. He found the woman lying on the floor with a bullet wound in her forehead and another in the abdomen. He had her promptly removed to the Alfred Hospital, where she at present lies in a very critical condition. As the constable entered the house he encountered Fegan in the passage. The man bore a wild, frenzied, look, and threatened to shoot the officer if he dared to interfere. The constable, by clever scheming, distracted the attention of Fegan, and seized an opportunity to wrest the pistol from him. Subsequently the man was locked up on a charge of attempting to murder his wife. The unfortunate woman was operated on at the Alfred Hospital late tonight, but the doctors could not locate the bullet which is lodged in the abdomen. Very slight hopes are entertained of Mrs. Fegan’s recovery. Constable McCarthy, when he chased Fegan to the house and tried to take the revolver from him, had a very sensational experience. Fegan, maddened by drink and rage, swore to kill anybody who approached him and as if to bear out his threat he levelled the pistol at the constable. Fegan had told Constable McCarthy that he wanted to get a certain letter which he believed to be in an upstairs bedroom, and encouraging him in this, the constable slowly followed him upstairs. As soon as the room was reached Fegan searched on the table, and finding the letter rushed to the fireplace with it, where it was soon burnt to ashes. He then lowered the revolver, which was all the time directed at McCarthy’s head, and saying, ” That’s why I did it for,” surrendered himself. Mrs. Fegan is a hard working, industrious woman, and really the breadwinner for the family. She refused to give her dissolute, drunken husband the money he demanded, and his rage at being refused frightened her. She ran across to a neighbour’s house, only to be followed by Fegan, who chased her upstairs into the bedroom and there shot her.