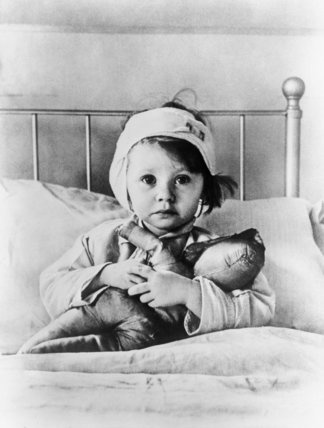 CAUGHT in the throes of a serious epidemic of whooping cough, six children in the little community at Cape Otway Lighthouse were given relief by a doctor from Colac, who travelled 80 miles over rugged country in response to an urgent call. The children (three boys and three girls, whose ages range from two to 14 years) were attended by their parents for about a week, but when it was realised that the epidemic was spreading the Commonwealth Lighthouse Department in Melbourne was advised. One little girl is still seriously ill. Shortly before noon Mr. A. J. Copaul (headkeeper) communicated with Melbourne asking for medical assistance. The Lighthouse Department, after ascertaining that the epidemic was too serious to he handled by the district nurse at Apollo Bay a few miles away, advised the keeper, to telephone Colac for Dr. K. .Day. Dr. Day was on leave, but Dr. Brown readily agreed to go to the aid of the children. Fifteen minutes after receiving word of the trouble. Dr. Brown left by car for Hordern Vale, 70 miles distant. Travelling at 60 miles an hour, he arrived there at 3p.m., and was met by keepers from the lighthouse. The last 10 miles to the lighthouse were made on a buckboard conveyance, drawn by a horse, over burning sandhills. At 5 p.m. Dr. Brown was at the lighthouse and attending the children. He prescribed medicine and pronounced them all out of danger, although he said that little Audrey Rixon (aged -six years) was in a serious condition, and must be kept in bed until the crisis had passed. Speaking over the long-distance telephone Mr. Copaul said the epidemic started about a week ago, when his little son, Maurice, aged two years, became ill. The epidemic spread until six out of the 13 children at the lighthouse were suffering. They were flushed and feverish, he said, and unable to sleep at night. Never has there been such a unique hospital as that at Cape Otway. There are four lightkeepers with their wives and 13 children on the headland, and together they make a self contained community. Far from any educational centre the children have a school of their own the only lighthouse school in Australia. It is maintained by the Education Department, which provides a teacher. In winter the lighthouse can be approached only by bullock transport over 10 miles, of boggy country. The children were all on holiday when the epidemic swept the lighthouse.

Murdered by His Son
Scroll to top Book online now!