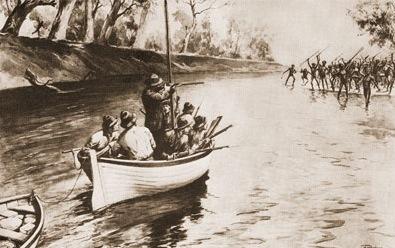 Captain Charles Sturt was born in India in 1795. He came to Australia in 1827, and soon after undertook to solve the mystery of where the inland rivers of New South Wales flowed. Because they appeared to flow towards the centre of the continent, the belief was held that they emptied into an inland sea. Drawing on the skills of experienced bushman and explorer Hamilton Hume, Sturt departed in late 1828 to trace the Macquarie River. Following the Macquarie inland, they came to a smaller river which, due to the drought, was merely a series of waterholes. This was the Bogan, named after an Aboriginal word meaning “birthplace of a king”. Sturt followed the Bogan downstream past the site of today’s Bourke, until he arrived suddenly at what he described as “a noble river”, on the 2nd of February 1829. This was the Darling, which Sturt named after Governor Darling. The discovery of the Darling brought a new element to the mystery of the rivers: its banks clearly showed that during flood-times, it would carry huge amounts of water. It remained to be determined whether the river drained into an inland sea to the southwest, or whether it flowed elsewhere.