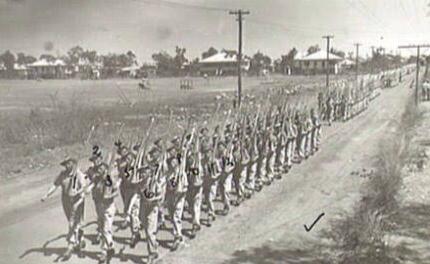 Norman Brook, 23, of Brisbane, appeared in the Criminal Court charged with the murder of Lance Corporal Jack Lloyd, 25, of Brisbane, Army-Signaller . Lloyds body was found with a stick protruding from it, in a paddock near Balcombe military camp, Mount Martha, Mornington Peninsula, on the 6th of February. There were 13 lacerated wounds in the face and head, and the skull had been fractured. Brook attended a dance in the Anzac Hall on the night of the 5th of February. He left the hall about 10.45pm, and Lloyd followed him. Later, in a paddock, Lloyd made an improper suggestion, and Brook attacked him with a stick, causing fatal injuries. Brook, on oath, said he had had about a dozen drinks before going to the dance, and he became suddenly ill and went into the paddock. As he left the hall, Lloyd was standing in the doorway. While he was vomiting in an isolated spot. Lloyd came to him and said he should make some attempt to straighten himself up because he had to go on picket duty. Lloyd took him into a paddock and told him to walk round to sober up. Brook said he sat down with a violent headache, and Lloyd made an improper suggestion, but he knocked Lloyd aside. He was so disgusted with Lloyd that he picked up a stick to ward him off and defend himself. He was in a very weak state. but he hit Lloyd with the stick a couple of times. There was a struggle, and after that he returned to the camp. He did not know Lloyd was dead until the following Tuesday when he was questioned by the police.

Baby at the Gentleman’s Baths