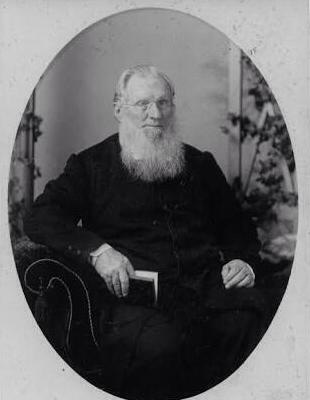 The situation of chaplain to the Geelong gaols has for many years been worthily filled by the Rev J. C. Handt, a German missionary, who, we believe, received his ordination in the colony. In addition to his labours at the gaols, it has been his duty to attend to the religious wants of Church of England patients at the hospital. Report speaks highly of his earnest, unassuming, truly Christian deportment, and he has performed his duties with all the energetic simplicity. Whether ministering to the hardened criminal working in irons, or giving rights of the disease lying in expectation of the hour of dissolution, he has been equally zealous in the discharge of his trust ; and if winning the esteem of those to whom lie, has ministered be a proof of success, we believe that his services have been beyond all price. Mr Handt has laboured in his vocation as a missionary for some thirty or forty years, twenty-five of which have been spent in this or the neighbouring colonies. His first field was Moreton Bay, where he went out preaching the Gospel among blacks and bushrangers, and ever since has he been working in the same good cause, with but poor reward. This man, now verging on if not exceeding sixty years of age, has for some time found congenial employment in the gaols and charitable institutions of Geelong. His emoluments were just sufficient to supply his simple wants, and he was looking forward to the continuance of his labours among the sick and dying until his own time should come. But it seems that he is doomed to disappointment. He is a man of quiet, un complaining disposition, one who makes no parede of his martyrdom, and we have, accordingly, only learned by accident tho great calamity that has overtaken him. One day not long ago this excellent old man received a letter, a cold, heartless, cruel letter, dismissing him from his situation. The letter was signed, ‘ Your faithful brother , in Christ, C. Melbourne.’ A few days after dismissing this really efficient working clergyman, his Lordship the Bishop told the Assembly of his Church that he would have to go to the world’s fair to bring out clergymen to supply the spiritual destitution of the colony.

Horrible Murder of a Swagman