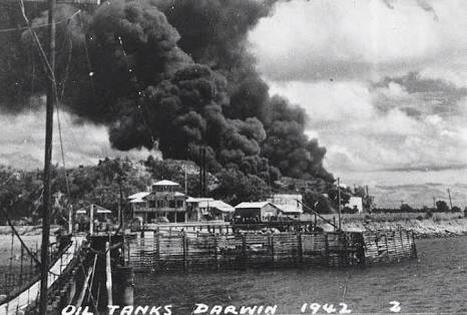 In 1942, Darwin, the town on the north coast of Australia’s Northern Territory, had an official population of about 2,000. It was a strategically-placed naval port and airbase. During World War II, on 19 February 1942, the Japanese attacked Darwin, launching two waves of planes comprising 242 bombers and fighters. The first wave of 188 Japanese planes was spotted at about 9.15am by civilians on Bathurst and Melville Islands, and Darwin was warned at least twice by radio. However, the warnings were not taken seriously, and the attackers arrived at their target just before 10.00am. Just before midday, there was a high altitude attack by land-based bombers, concentrated on the Darwin RAAF Airfield: this attack lasted around 20 minutes. Although it was a less significant target, a greater number of bombs were dropped than in the attack on Pearl Harbor. At least 250 civilians and military personnel were killed, but the real toll was probably much higher as the count did not include the many Indigenous Australians in the area; nor were the numbers among the crews in the merchant ships in the harbour fully known. Most of Darwin’s essential services were destroyed, and half of the town’s civilian population fled due to fears of imminent invasion. Darwin’s naval base was essentially abandoned following the attack, and ships were repositioned at Brisbane, Queensland, and Fremantle in Western Australia. Admiral Osami Nagano, the Chief of the Navy General Staff, was in favour of invading Australia, but the Japanese army lacked the resources for such an undertaking, and opted for the invasion of Midway Island instead. The attacks were the first of an estimated 64 air raids against Australia during 1942-43.

Defence of a woman
Scroll to top Book online now!