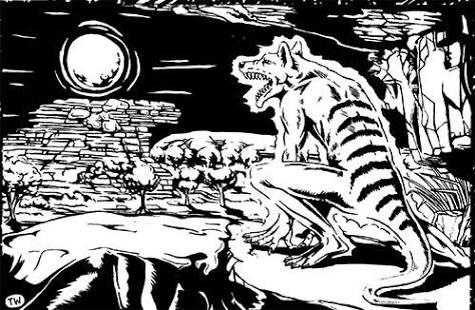 “Myrtleford, in the Mount Buffalo district of North East Victoria, has a mysterious animal, which stands like a human being, and is described as being 7ft high, with a large round hairy head, carrying four tusks. Search parties tried to capture the creature, but an all-night search failed to locate it. That the animal does exist and that it is savage is vouched for by Mr. William Nutall of Myrtleford. “He was returning home from Brighton with his sister and a companion, when, nearing Europa railway station, he alighted from his horse to adjust the saddle gear, the others riding on. Suddenly, he said, he was attacked by the strange animal. It snarled at him and charged, tearing his shirt to ribbons.” While the startled rider’s horse managed to break free, poor Nutall was chased onto the railway line. Luckily, for Nutall, the animal was prevented from continuing the pursuit by a wire fence, through which the terrified man made good his escape.

Knowing When to Die